Angry Birds 2 - Your attention is another hit the second part of the fighting birds. The main game actions have not changed: gamers as before need to fight with greenskins pigs, shooting them with a large catapult. The difficulty, as in the previous version, lies in the exact choice of flight path of birds, as well as height. The new game variation will give gamers a chance to pump the abilities of the characters.

In addition to all this, you can stop at the choice of birds, before you zapulnut her opponents. At the end of each game stage there is a difficult leader. In addition, from now on, users have access to the multiplayer mode, where each of the participants can enter into battle with other fans of the feathered world to show their strength and mental abilities.

The great news is that the Android game does not require any fee and you can download it to all users. However, we must not forget that there are in-game purchases, where you have to pay with real money, if there is such a desire. When you first start the game gamers will immediately feel the visible difference in the design.

Graphic effects are more lively, however not all Android device can pull the toy, some were noticeable brakes and defective reproduction of the picture. Animation and design should not disappoint fans of the series angry birds. The control system is also not subjected to any changes: take a huge slingshot, with all the strength pull the gum, point at the target, and shoot the pigs. 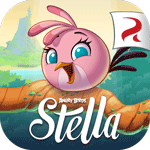 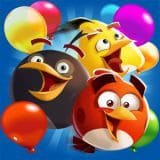