Realistic picturesque simulator of life of a wild predator, where gamers will have to feel in the shoes of a virtual wolf. The toy will take users to the mysterious world of wildlife, in which survival will depend on agility, courage and the presence of sharp teeth. Initially, you need to stay on the choice of his name and appearance of the beast, and then select the desired game mode, several of them.

The original is called a cooperative, where all the wolf pack are friendly and live as one happy family, hunting is not alone. Secondary mode-player vs. player, here each of the gamers plays for himself, access to which opens after the passage of the fourth stage.

Playing in cooperative mode, users are given the opportunity to train to understand the management and get used to the gameplay. You need to The Wolf, then wander through various locations and hunt helpless assorted animals: deer, hares, foxes, rabbits and others.

However, do not forget that many of the animals can well Pat, turn you into a victim. If wolf for some reason dies, then he is resurrected not far from seats his death, and his level of health becomes full. The continued survival of the wolf depends on you. 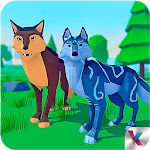 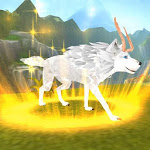