The next second part of the spectacular battles, where the huge arena players will face all sorts of different iron machines, equipped with a variety of weapons. As in the previous part of the game there is no any storyline. Simply click on the "start" and we are thrown into a large arena for deadly battles.

Gamers need to kill all opponents and survive yourself. You will control a small robot armed with a circular saw attached to the front. To completely destroy the enemy must hiccup his vulnerability and stick in these places the circular of your hero.

In addition, small explosive barrels, similar to a fire extinguisher, are scattered throughout the arena. If they blow up near an enemy opponent, he will receive considerable damage. After successful completion of stage users and managed Robot Fighting 2 - Minibots 3D, receives gold and silver bullion.

Returning after a breathtaking battle in the garage, you can repair your damaged robot, increase armor, change weapons, for example, put an axe or drill, besides change the color. Visual design and music is completely copied from the original part, the developers are even too lazy to add anything new, only opponents have undergone changes. 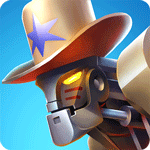 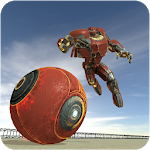