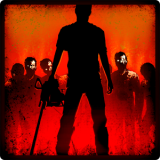 Into the Dead - The wonderful world engulfed horrible zombie epidemic, filthy living dead came alive, began to infect and devour the rest of humanity, pulling out innocent civilians of the colon, turning them into its insatiable soldiers. How long in this nightmarish hell of the situation you manage to survive?

In a bloody, half-ruined world, mortals have no chance, only to turn into the same rotting monster and join the army of zombified creatures that enslave the world. But maybe there's a second chance.

Proceed with great caution, doing all sorts to survive in the zombie Apocalypse, while moving try not to stop, one wrong move and you are infected. Deep gameplay with unmatched sound, graphics and visual effects.

Open an Arsenal of more effective weapons to better fend off the bloodthirsty walking dead. Call on the deadly battle of his comrades, and show who is a real professional. Endless upgrades, a lot of new content, unique features and modes, as well as Russian-language support, a lot of teken in the public domain and bought all the things in the store.