If the players are very bored with the creation of tedious hotels, megacities, farms, the developers of the game Studio Pixel Federation decided to offer gamers to feel in the shoes of the Manager of the railway station.

A huge number of large multi-ton locomotives and other railway equipment, with huge impatience will expect his master on the limitless expanse of the newly created railroad simulator. The goal of users is very simple - to turn a small old shabby station into a powerful railway company and engage in its further development, which in the future may bring gamers billions of American dollars.

Initially, you will start with trains with steam engines, and finish with high-speed trains with electric traction. After all, in real life, such a wonderful opportunity few people will get. At the disposal of users who gathered download TrainStation-Game On Rails for Android , will be a considerable collection of all kinds of trains, which will include diesel, magnetic, as well as steam and electric.

Recreate from scratch your own railway Empire, constantly expand it and try to do everything possible so that your large-scale company always flourished and lived forever. Toy includes a considerable number of trains, of which there are more than a thousand. 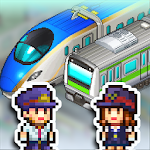