All parts fanatasies of the game "Heroes" have always been popular, had excellent graphics and magic atmosphere, constantly tightening gamers to its dangerous fantasy world, where gamers had to build the main base, build various facilities, make upgrades to our buildings, and to create and hire combat units and improve them.

They recruited their invincible army and went on very long campaigns, on the way exploring and capturing new lands, fighting with enemy opponents in turn-based mode. This time the game company decided to demonstrate their new creation, a very high-quality role-playing toy, which is in the public domain.

The creators have developed a very user-friendly interface that players can easily get used to the game. But, to achieve victorious success and accomplishment of these feats users need to make the maximum amount of all possible efforts. Gamers will be forced to go on an unforgettable adventure through deadly, but picturesque and mysterious places. 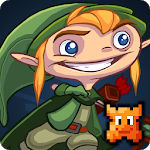